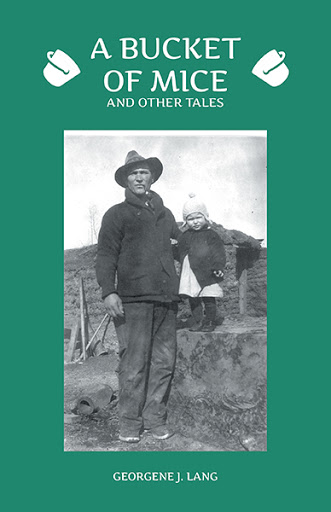 A Bucket Of Mice And Other Tales
Growing Up On The Prairie In The 1930's
by Georgene J. Lang

These stories were written by a lady who grew up in North Dakota during the Great Depression and the adversities and happy times that came her way as she grew. The stories are the occurrences in her life and how she learned to deal with them. Some of the stories are humorous and some showed how she dealt with fear. There is a powerful work ethic depicted and it stayed with her all her life. There are wonderful people that come to bear in the stories and she has never forgotten them. It is a book that portrays many feelings, good times and bad times.

Many friends and family have been very outspoken that this is a good book and would do well if published.

Georgene was born in N.Dak. and lived her childhood there. She was greatly influenced by her father who was a farmer but a very literate man. He was a magnificent story teller and also wrote poems. When the evenings were cold, her father entertained the family with wonderful stories and Georgene never forgot them. The father was an avid reader and so Georgene became one also. She loved stories so much she began to write them down at an early age.

When she left home and began college, an English teacher praised her written work. That praise encouraged Georgene to think about putting her work in print. As her life moved on, she began to travel and has gone to many countries in the world.

A Bucket Of Mice And Other Tales will be available in the FriesenPress Bookstore soon.