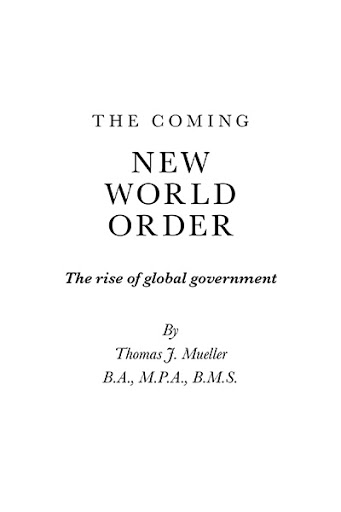 This book proposes a step-by-step blueprint for a better world. There is a storm brewing on the horizon. A new world order is coming based on all the trends and global pressures that is facing mankind today. The question is, who's world vision is going to prevail and lead us into the 21st century and beyond? Will it be based on Man's vision and his world-ruling government that has only produced war or God's vision and Christ's world-ruling government that is guaranteed to produce lasting peace? The outcome to this vital question and struggle will either bring on the "Apocalypse" or the prophesied "Millennium." It is our choice and we need to decide soon before we hit a point of no return! Prophecy says the Kingdom of Man is going to face off with the Kingdom of God on the Plains of Megiddo in Northern Israel in the not too distant future for supremacy on earth if we don't heed the warnings and change our ways. Our message, therefore, is simple. Christ is returning shortly as King of Kings to establish a new political order, His world-ruling government of the Kingdom of God on earth. His return can either be a forceful one or a peaceful one. It is our decision. Either way, we need to decide soon and get ready for the Second Coming!

Tom Mueller is a contemporary spiritual teacher and leader. He is director of Kingdom Ministries. In his writings and seminars, he conveys a simple yet profound message with the timeless and uncomplicated clarity of the prophets of old. There is a way out of the Apocalypse and into world utopia of the Kingdom of God if we only heed the warnings. Tom holds both a Bachelor’s and a Master’s degree in political science from American University, in Washington, D.C. and a Bachelor’s in military science from Georgetown University, Army ROTC. Served with distinction in Vietnam, he reached the rank of Major in the United States Army Reserve. Raised a Catholic, Tom became a born again Christian some thirty years ago and has attended Baptist Churches around the area ever since. Tom has traveled extensively, taking his teachings throughout the world. In addition to Tom’s love of religion and politics, he has a private pilot’s license and feels the closest to the Lord when he’s flying. He and his wife, Cumi, live just outside of Washington, D.C.