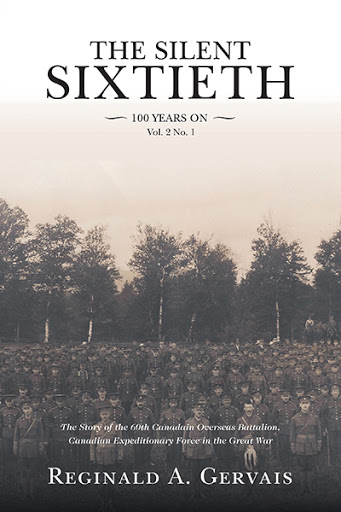 The Silent Sixtieth 100 Years On
The Story of the 60th Canadian Overseas Battalion, Canadian Expeditionary Force In the Great War
by Reginald A. Gervais

The Silent Sixtieth, is the story of the 60th Canadian Overseas Battalion, in World War One.

Originally begun simply as research into the author’s ancestry, The Silent Sixtieth evolved into a history of the 60th Canadian Overseas Battalion in World War One. The book details the forming of the battalion in Montreal in the summer of 1915, follows it through training and into France, where it fought in some of the defining battles of Canada’s First World War effort: Ypres, Mount Sorrel, the Somme, and Vimy Ridge. The Silent Sixtieth chronicles the struggles that eventually became one of the foundational experiences of the Canadian historical identity, and does so with both an eye for detail and a personal touch. By the end of the war, 39% of mobilized Canadian troops were casualties. 2015 is the 100th anniversary of the founding of the Battalion.

All Reginald A. Gervais was trying to do was find out a little about his grandfather’s military service. He never dreamed it would culminate in a book about the battalion he served with. Along the way, he has become a bit of an amateur historian and now regularly makes presentations to a local High School. He is more than willing to sit for hours and discuss Canada’s military in World War One.