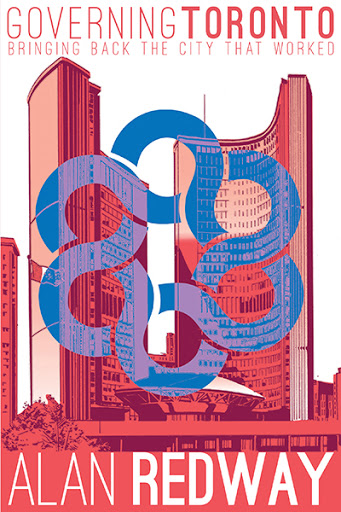 Governing Toronto: Bringing back the city that worked
by Alan Redway

In stark contrast to the dysfunctional megacity of today, The Municipality of Metropolitan Toronto was a city that worked. Some refer to this period from 1954 to 1998 as Toronto’s “Golden Age”.

This book traces the growth and governance of the city from its creation in 1834 through its successful Metro years to why and how the decision was made to establish the present megacity while at the same time either accidentally or deliberately turning the Ontario government into both a provincial government and a regional government, as well, for a significantly enlarged Greater Toronto Area.

Then it urges the provincial government to initiate a long over-due review of the governance of the city aimed at returning it to a city that works either by way of a de-amalgamation, as successfully achieved in Montreal, or at the very least by a decentralization of local responsibilities.

“As Premier of Quebec, my government passed legislation to allow previously amalgamated municipalities to de–amalgamate. While calling on the Ontario government to review the governance of Toronto, Alan Redway points out not only that Montreal was successfully de–amalgamated but alternatively that the city of Montreal’s present borough system could well be a model for a more decentralized Toronto form of government.”

“Alan Redway guides us through the creation and evolution of Metro Toronto and of the amalgamated city. Toronto’s policy–makers–both provincially and locally–should carefully consider his plea to ‘Bring Back the City that Worked’.”

“Alan Redway has done a superb job of pulling together so many back-room stories about how decisions were made over a fifty year period leading up to the creation of the megacity–and why it should be rethought. Bravo!”

Alan Redway is a recently retired lawyer, born in Toronto, with a degree in Commerce and Finance from the University of Toronto and a law degree from Osgoode Hall Law School. Mr. Redway served for six years as Mayor of the Borough of East York and as a member of Metropolitan Toronto Council and Executive Committee. Later he was elected to the parliament of Canada where he served for almost ten years as a Progressive Conservative member of the House of Commons and as Minister of State (Housing). In 1997 as Honorary Chair of Team East York he actively opposed the Toronto amalgamation.