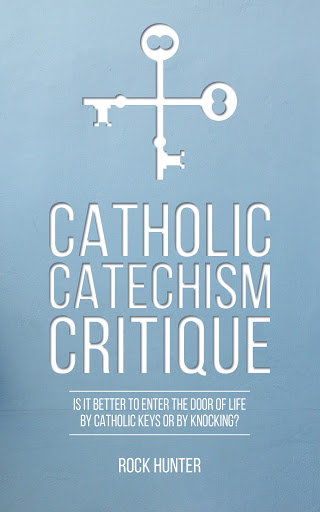 Catholic Catechism Critique
Is it Better to Enter the Door of Life by Catholic Keys or by Knocking?
by Rock Hunter

Catholic Catechism Critique closely examines all 2, 865 paragraphs of the Catholic Catechism, beginning with Marian Doctrine and the idea that St. Mary cannot be co-Mediator (Mediatrix) on a par with God unless she is God. The analysis moves through truth-testing/truth-seeking, to sacred transmission (of truth), to NEWTOWN (a Catholic CANOPOLIS), and a "GODBOT" that could be programmed by the Catholic Magisterium. The examination ends with future humans and their potential relationship with the Roman Catholic Church.

In addition, as part of the process, empirical truth testing calls into question rituals of faith healing and exorcism, and testing by logic/reasoning invalidates other assertions.

If it hopes to survive, this book argues, the Roman Catholic Church must rectify its Catechism’s failings, and may evolve to become a “future Catholicism under a Jewish protectorate.”

Paragraph 801 of Catholic Catechism tells us the office of the Church's shepherds is "to test all things". That means they should welcome truth testing and good, honest questions for all 2,865 paragraphs. For world religions in general, transcendent/metaphysical claims cannot be tested or proven by people on Earth unless they impact upon the physical realm where empirical testing and testing by logic and reason apply. "Faith" must have its corresponding "works".

Rock Hunter holds a PhD in philosophy/psychology and has taught comparative religion in the Canadian university system. He has published two other books, both through Xulon: The Jew Who Said He Was God and Gold War: The Lost Gold Mines of Canada’s Mountain Indians.

Catholic Catechism Critique will be available in the FriesenPress Bookstore soon.