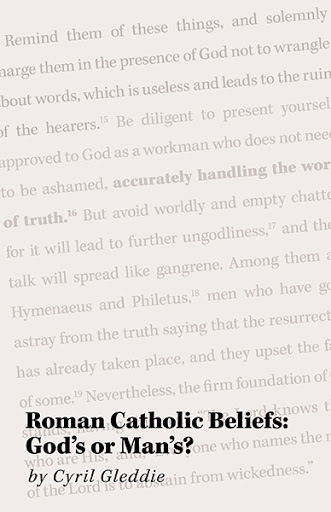 If you’re a sports fan, you know that professional sports teams play in leagues. Examples include the AL and the NL for baseball, the NFL and CFL for football, and the NHL for hockey, to name a few.

Any team wanting to play in a league must agree to abide by all of its rules, and no team can change any rule without the entire league’s approval. Teams that refuse to abide by the league’s rules get kicked out. It’s that simple.

This also applies to God’s “league” or family. God has shared His rules and standards in His Word, the Bible, to show how to be a Christian and abide in Him. I will endeavor to show in this book how Roman Catholicism has not and does not abide by God’s book of rules.

“I am an adult born-again believer who was baptized and raised Roman Catholic and went through the Catholic school system. After reading this book, I am amazed at how little I was taught about the faith I thought I was a part of. It was blind faith. This book does not ‘bash’ the Catholic faith, but instead educates us about it as a whole, and every truth is backed by Scripture. So, for the believer, it’s a fresh look at the Scriptures. For everyone else who honestly wants to learn and grow in the knowledge of God, it will be a big eye-opener. I plan to read it more than once, as it is loaded with information, and I will recommend it to my friends in all denominations.”

My father, Cyril, was raised on a large ranch where hard work was expected. However, it was not the most important expectation of his family. The most important thing was to have a personal relationship with Christ.

Dad was not a straight A student. He only went to school for the sports and socializing and was very good at both. The day he was asked why he kept going back to school, he quit. Thankfully, in those days you didn’t need to graduate from high school to make a good life for yourself.

Dad went on to become a firefighter medic, and he relocated to St. Albert, Alberta. There he met his beautiful wife and together they raised three amazing people: Christopher, a lawyer; Matthew, an engineer; and Janeal, a stay-at-home wife and mother. After 35 faithful years, he retired from the fire department.

Though he never finished high school, he has an overwhelming list of accomplishments. To name just a few, he has ranched and farmed (apparently two different things); worked in construction, law enforcement, fire suppression, and emergency medicine; sung with a semi-professional group; and he currently drives professionally. Everything he has done, he’s done with high skill. Now he can add “wrote a book” to his list of accomplishments. In his words, “It never entered my mind as something I would do.”