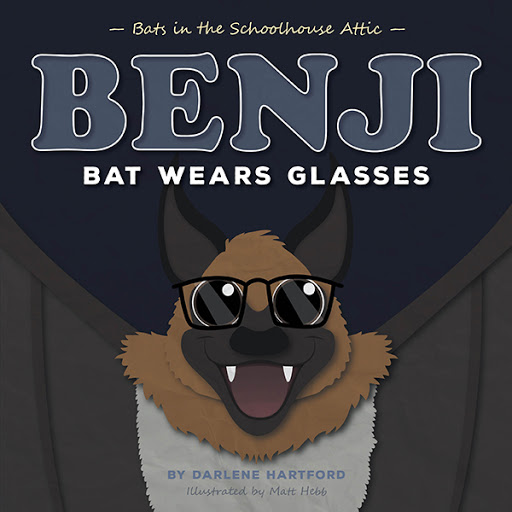 Benji was a curious Little Brown Bat who moved from the schoolhouse attic into a new roost at Old Man Willowby’s summer cabin.

One night, Benji overheard the old man say he could see so much better with his new glasses, proving he must have been “blind as a bat”. Benji panicked – was he blind? If so, he wanted to see better too. His curiosity was sparked by the idea of wearing glasses! This led to an extraordinary adventure between Benji and Old Man Willowby. However, Mother Bat was skeptical of Benji’s tales about wearing glasses and what he saw. She lovingly dismissed Benji’s stories, until one night, when everything changed.

In 1908 a school was constructed at the water’s edge of Lake Okanagan in Peachland, British Columbia. It was built as a community school for all ages, and over time, changed to a High School, Elementary School, and eventually a Primary School. In 2002 it was closed. Windows and doors were boarded shut and it sat dormant, or so it seemed. Upon the decision to renovate the historic building a maternity colony of approximately 2,000 bats was discovered inhabiting the attic. In 2013 the schoolhouse reopened as the Peachland Historic Primary School, a community building where people co-habituate with bats. Visit the historic site to learn more about bat species and to view Peachland Bats in the schoolhouse attic. The Peachland Chamber of Commerce became host to Peachland Bats Educational and Conservation Program. This book was created to assist in their initiative. www.peachlandbats.ca

Darlene Hartford dedicated the series, Bats in the Schoolhouse Attic, to her grandchildren.

Benji Bat Wears Glasses will be available in the FriesenPress Bookstore soon.