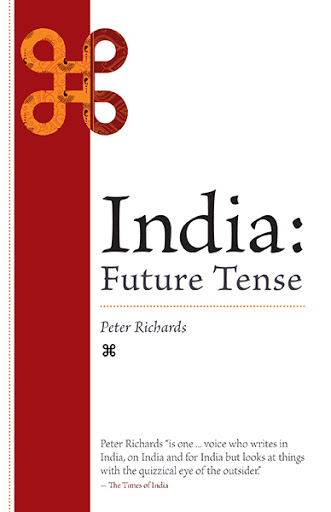 Whether you are new to things Indian or have particular interests in India, this book is your decoding manual for the most complex country on earth.

India: Future Tense is about forces shaping today’s India and the opportunities Indians have to influence their world at home and abroad.

Accessible, thought-provoking and occasionally irreverent, this book is grounded in the author’s wide-ranging 50-year experience in the birthplace of one in six of our planet’s people.

Peter Richards "is one ... voice who writes in India, on India and for India but looks at things with the quizzical eye of the outsider." (N.S. Gupta in the Times of India).

Peter Richards has followed India for over 50 years, in various roles: student, “on the road”, as an official, and as the founder in India of a small publishing company.

He has degrees in history/political science, law and economic planning from McGill and the Universities of Toronto and British Columbia, where he taught and directed a project on Indonesia.

He has been a Canadian diplomat in four Asian countries and a Canada World Youth coordinator in two more. He has worked in the Latin American office of the Bank of Nova Scotia in Toronto.

Based in Singapore, he was vice president of the Asia Pacific Foundation of Canada for South and Southeast Asia, and Canadian representative in the Asia Pacific Economic Cooperation forum, handling HRD and sustainable development.

India has been a continuing focus of his attention whatever his other activities. This may be the result of having read Rudyard Kipling’s Kim as a boy.

Richards has recently returned to Canada where he writes and reads in Victoria, British Columbia.

India: Future Tense will be available in the FriesenPress Bookstore soon.