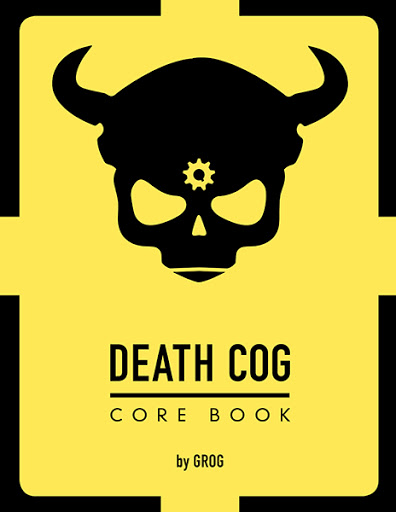 Welcome to Death Cog, a versatile, customizable, and gigantic pen-and-paper tabletop RPG designed by a life-long student of the gaming arts. Bigger than Shadowrun and more flexible than D&D, Death Cog boasts everything from dragons to nuclear bombs. Craft your character’s race, class, and abilities, then outfit them with anything from a sharpened toothpick to gigantic riding armor. Visit distant worlds, battle strange creatures, and explore dark dungeons full of sparkly treasure.

This book covers everything needed by game masters and players alike, from character creation to dispute resolution. New players are introduced through a comprehensive explanation of the game mechanics, while those more experienced can jump right in to explore its innumerable options. If the standard suite of critters and quests aren’t enough, the game allows for unending customizations. Want to fight battles as a high-seas pirate? No problem. Does steam-punk do it for you? You can do that too. Grab some snacks, call your friends, and get ready for a treat. It’s like no tabletop game you’ve played before.

Elliott Gregg, aka Grog, has lived a life of games. From Pacman as a toddler, Mario as a child, and D&D later on, he’s seen it all. He studied programming and video game development at Full Sail University in Florida before beginning a project to bring together all the best parts of the hundreds of games he’s played. Brandishing his impeccable nerd credentials, he draws from thirty years of gaming experience to bring you this fresh and exciting addition to the tabletop RPG genre.

Death Cog is his first book. He lives in Wisconsin.