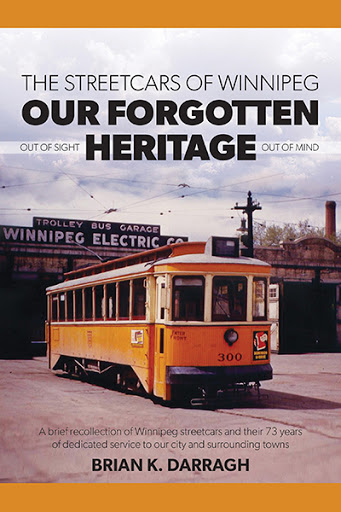 The Streetcars of Winnipeg - Our Forgotten Heritage
Out of Sight - Out of Mind
by Brian K. Darragh

On the 19th of September, 2015 it will be 60 years since the last streetcar made its final run through Winnipeg’s well known Portage and Main. Even our oldest daughter in her mid fifties never had a chance to see a Winnipeg streetcar operating, and naturally her children and grandchildren haven’t either. What an experience they have missed! I operated the streetcars for the final 17 months of existence here, April 1954 to September 1955. I was the third youngest streetcar operator at that time. I turned 86 years old in November 2014 so the remaining half dozen operators will be in their mid nineties now. I have tried to capture the experience that the 73 years of streetcar service provided to Winnipeg and the surrounding towns. From the start of the horse cars in 1882 where the drivers were paid 12 cents an hour, to the beginning of electric streetcars in January 1891, this book describes with the aid of numerous pictures the essence of the transportation experience of those times. The streetcars ran for approximately 35 years before the first four buses came in 1918. In that time the streetcars supported the growth of the city to 150,000 people by 1912 becoming the third largest city in Canada. Writing this book has brought back many fond memories of those days. The last Winnipeg streetcar book was written by the late John Baker 32 years ago. It’s about time for another.

My parents immigrated from Northern Ireland to Winnipeg in the summer of 1927. I was born in November 1928. I was an only child. It was the start of the depression years and jobs were scarce. As a 4 year old I remember riding the streetcar downtown with my mother. If I behaved while she shopped at Eaton’s she would take me to the Woolworths store and buy me a 10 cent toy! By 1933 my father couldn’t obtain any kind of work in the city, so we moved to a vacant farm about 100 miles west of Winnipeg in the district of Keyes. My parents, city slickers, knew absolutely nothing about farming but we survived. I attended a one room school. One teacher taught all the subjects from grade one to 10. There were never more than 20 to 25 kids in the whole school. We had no radio for 3 years, no car for 7 years, no electricity for 16 , no telephone for 10 and never did have running water or plumbing. In 1954, I left the farm at the age of 25. I became employed by Winnipeg Transit for the next 38 years. The girl I had been dating also moved to Winnipeg and we were married in 1955. We have 2 married daughters, 4 grandchildren and 1 great grandchild. I retired August 1st 1992 after 38 years driving streetcars, trolley buses, and diesel buses, was the last streetcar employee to retire. From badge 825 to badge 1.