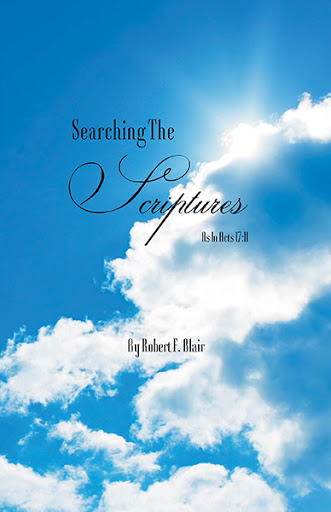 Searching the Scriptures
As in Acts 17:11
by Robert F. Blair

Is it true that a born-again Christian can never be lost? Do the scriptures teach that we should forgive all sinners? What is the one thing Christians must do to ensure they will not be punished on Judgment Day? Searching the Scriptures as in Acts 17:11 helps Christians to explore these questions by returning back to the original teachings of Christ in the bible. Author Robert Blair provides the structure for this journey through his thought-provoking commentary and selection of scriptures that point to a shocking revelation: Many widely accepted traditions in the church do NOT have a basis in the bible.

This book will be of interest to any Christian seeking to gain a clearer understanding of the scriptures and how to live a life that reflects their teachings. 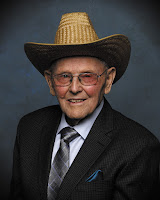 Robert Blair has spent over 75 years searching for truth in the scriptures. Born in Alberta, he spent his early years on a farm and learned how to break horses. In his later years, he worked as a miner, a welder, and a rancher. In 1943, Blair joined the Royal Canadian Air Force and served as a bombing instructor. In 1946, he married the love of his life, Stella Coad. Together, they raised seven children and ran a ranch that grew to have over 3000 yearlings. In 1999, the Blairs retired to Camrose, Alberta, where Robert Blair remains today. His wife, Stella, passed away in 2007.

Blair has remained active in the church throughout his life, including serving as a Sunday school teacher and on the Church board. He notes that as a child, he “was reminded that I was a sinner and that the wages of sin is death. I was also taught that God had made a way for repentant sinners to be forgiven.” His inspiration for writing this book stems from his belief in this truth, his awareness of the difference it has made in his life, and his desire to share this truth with others.

Searching the Scriptures will be available in the FriesenPress Bookstore soon.