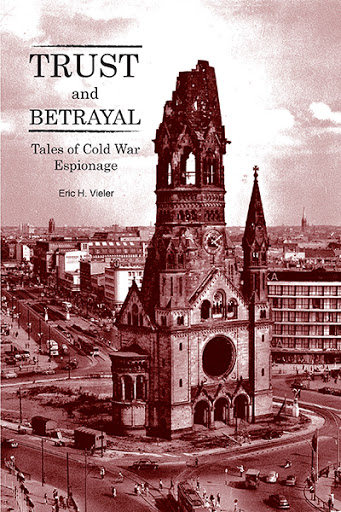 It is 1957, West Berlin. US Army Captain Eric Vieler is assigned to oversee the identification, vetting, development and deployment of every-day German citizens --- as spies. While the Berlin Wall is not yet a reality, the Cold War tensions between the western allies and the Soviets in East Germany are very real. It’s a chess board with many pieces --- agents, handlers, influences and ...double agents. It’s a time marked by deceit, betrayal, shame and loss, both personal and national. “Trust and Betrayal: Tales of Cold War Espionage” provides an insider’s first hand, honest view of the dangerous time, the conflicts --- internal and external --- the truth and lies, and the pressure and intrigue that marked Vieler’s real-life experiences. His is not a life, or a story, like any other.

Eric Vieler was born in New York City on December 7, 1931 of German parents. His family returned to Germany in 1934, where he experienced World War II as a child living in the industrial sector of Westphalia. Following the war, at age 13, he acted as an interpreter for the British occupation forces in Germany, and then was repatriated to the United States in 1947. He lived in Queens, New York where he completed high school. After the outbreak of the Korean Conflict in 1950, he enlisted in the US Army, attended Officer Candidate School and was commissioned a second lieutenant, infantry, at age 19.

He was a rifle platoon leader with the Seventh Infantry Division in Korea, and participated in the battles of Triangle Hill, Porkchop Hill and Old Baldy. He was wounded three times, the final time on March 24, 1953, which almost cost him his life. He was awarded the Silver Star, Bronze Star for Valor and three Purple Hearts. After nine months of hospitalization, mostly at Walter Reed Army Medical Center, he waived medical retirement in favor of staying on active duty.

A chance encounter with an intelligence staff officer at the Pentagon resulted in an invitation to join the Field Operations Intelligence program. His first assignment following his training at Fort Holabird was to Germany.

In 1996, he was awarded a doctoral degree in political science from University of Nevada. His dissertation The Ideological Roots of German National Socialism was published by Peter Lang, Inc. He has written two autobiographies, a Korean War memoir titled Destination Evil, and A Journey On My Own, describing his early life; both published by Hamilton Books.

His name appears in the Infantry School Hall of Fame as well as the Military Intelligence Hall of Fame. Eric Vieler lives in San Francisco with his beautiful wife Wickie.

Trust and Betrayal will be available in the FriesenPress Bookstore soon.