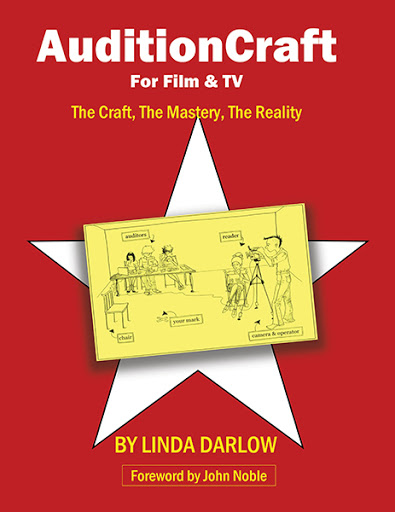 AuditionCraft for Film & TV
The Craft, The Mastery, The Reality
by Linda Darlow

AuditionCraft for Film & TV is a “how to” manual, using guidelines that any actor can follow in preparing for an on-camera audition. It covers: “The Craft” -- giving the actor specific tools to use when working on the material for an audition; “The Mastery” -- laying out a technique for handling the logistics of auditioning: from preparing at home, to getting there, to being in the room, to what to do when it’s over; and, “The Reality” -- explaining what it will take to have not only a successful but a satisfying and rewarding acting career. It has frequently been called the most practical, comprehensive and “user friendly” book of it’s kind on the market!

“After working over 20 years in film & TV, after thousands of auditions.... Linda’s book has reminded me of tools I had forgotten... this book is needed... it is practical, clear, absolutely dead on with its techniques, both physically and mentally.” Sarah Jane Redmond, Actress

“This book is an absolute necessity for the ‘beginner’ film actor, a great refresher for the ‘working’ actor and a terrific guide for ‘seasoned veterans’ who are teaching/coaching now.” Susan Blakely, Golden Globe Award “Best Actress”, 2 “Golden Globe” and 1 “Emmy” nominations

“I wish I had Linda’s book when I started my acting career, i might have worked more! Now I’m a Director and in reading this I found myself noting ‘I’ve got to use this -- how helpful it will be to the actors’. This is a practical, brilliantly insightful, no- nonsense A to Z acting manual, specifically regarding the dreaded audition process. AuditionCraft should be standard issue for anyone who’s going to walk into the audition room.” Kristoffer Tabori, Actor/Director

“Finally! a book I can use that my Drama kids can understand -- and their performances reflect it! James Crescenzo, Artistic Director: Theatre Temp, Dream big Production and Summer Visions Film Institute

Linda Darlow has been teaching Audition Technique for Film & TV and Commercials and leading The Performers’ Mastery Workshops for over 30 years in Los Angeles and Vancouver. She received UBCP’s 2010 “Sam Payne Award” for “humanity, integrity and the encouragement of new talent”, and had been nominated twice for a Leo Award as “Best Actress” in a Short Film.

A seasoned performer herself, Linda has appeared in over 27 TV Movies and Features, 30 TV Series with recurring roles in 6 of them. She has also had years of experience doing on-camera commercials as well as dubbing voices into English for cartoon series. Linda was also the Dialect/Dialogue Coach on the TV Series, “Fringe” for 4 seasons. For a full listing of her acting credits, visit: www.imdb.com

AuditionCraft for Film & TV will be available in the FriesenPress Bookstore soon.