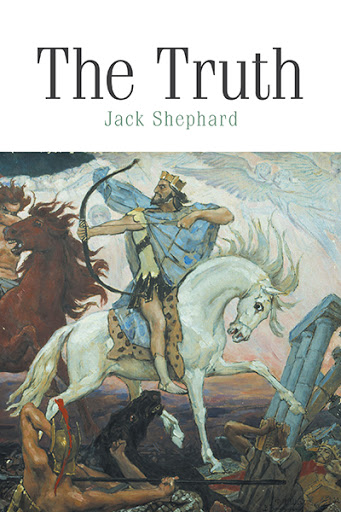 The Truth
by Jack Shephard

Did you know that Saddam Hussein, the man, is mentioned in the Bible many times? “He shall come up out of a bottomless pit.” Did you know that Osama bin Laden is also mentioned? “He shall cause fire to come down from the sky.” You will find inside these pages what these two mythical figures mentioned in the Bible play in our history. Finally a book has been written that will explain once and for all the meanings to the symbols and events described for us in the Bible’s Book of Revelation, often referred to as the “end times.” The author is not going to try and fore-tell what these events mentioned in the Bible mean, as all other Christian books and movies have done, but rather will explain to us where these events have already been played out before our very own eyes. The author will explain what the 7 seals, trumpets, and vials mean in the Book of Revelation. These events have already been played out before our very own eyes. That’s right. These events have already come and gone. And what about the twin towers? Are you ready?

Jack Shephard was born in Santa Monica, California July 7, 1942. Moved to San Fernando, California after his sophomore year of high school. He had Richie Valen the singer as a classmate. Family moved to Omaha, Nebraska a day after graduation. One year later enlisted in the army where he was stationed at Fort Riley, Kansas. After serving 3 years, joined local bowling teams in Omaha. His views changed drastically one day after watching a television program titled “The man who could see tomorrow” narrated by Orson Wells. He had previously doubted that any one could see the future but changed his mind when seeing previous predictions coming true. One such prediction was the attack on New York City by a man from Saudi Arabia. He discovered that he had an ability to understand the Book of Revelation and told friends about New York’s demise and that we would go to war against Iraq shortly after the Millennium. This is his only book written.