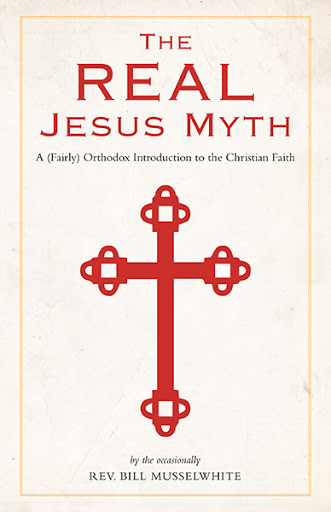 The Real Jesus Myth is what happens when a retired (but still cynical) journalist, who is also a retired (but still cynical) Anglican priest, decides to answer some of the questions tossed at him about the Christian Faith. Many people don’t know enough about the nuts and bolts of Christian belief – “doctrine” to use an unpopular word. This isn’t their fault: most mainline churches put “social justice” issues front and centre while doctrine, evangelism and apologetics gather dust in the rear pews. This may be one reason so many mainline churches are scrambling to stay afloat and, if so, why it’s long past time to re-emphasize the fundamentals of the Faith. The Real Jesus Myth is a (fairly) orthodox look at the Christian Faith centered around the Nicene Creed and bookended by comments on everything from why the bible is God’s word to why orthodoxy isn’t as scary as you may think. It is written both for Christians and for the curious non-Christian but one caution – the author is an ex columnist and police reporter, not a theologian, so don’t expect this to read like a textbook.

Bill Musselwhite was born in Dauphin, Man. and raised in Calgary. He became an Anglican in his teens and believing he was called to be a priest enrolled in Emmanuel College in Saskatoon. After two years he became an agnostic, left the seminary, and ended up as a journalist with The Calgary Herald. He retired in 1996 after 31 years as a reporter, columnist and feature writer. In the 1970s, Bill returned to the church and after several years of study was ordained in 1984. His was an unpaid ministry since he remained at The Herald. Bill discovered his future wife, Sherry, doing research in The Herald’s library, took her to coffee, and finding they were both book lovers decided they should combine libraries. In 1993 Sherry opened a used and antiquarian book shop, Cornhill Books, and when Bill retired they worked in the shop together. In 1998 they moved to the Okanagan Valley and operated Cornhill Books on the internet until they retired in 2011. Bill and Sherry have a daughter and three grandchildren. Bill is the author of A Study in Scarlett, a biography of Earle P. Scarlett. In 2012 he was awarded the Queen’s Jubilee Medal.

The Real Jesus Myth will be available in the FriesenPress Bookstore soon.