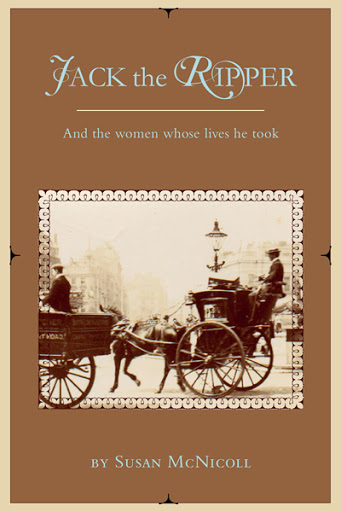 The East End of London, England in the 1880’s became the setting for a series of murders committed by probably the most famous serial killer of all time, Jack the Ripper. The slaughters of five women caused outrage and panic throughout the nation. Although speculation as to the killer’s identity continues unabated to this day, he was never caught. In Jack the Ripper, read Susan McNicoll’s vivid account not only of the murders, but also the Victorian times these women lived in. She looks at the victims but also explores the various possible suspects.

“. . . this may well be the best short overview of the crimes yet published”, said Stephen Ryder, who owns the largest Jack the Ripper website on the internet, casebook.org. “Well written and meticulously researched, Susan McNicoll’s Jack the Ripper is an excellent alternative for readers who want to learn more about Jack the Ripper but don’t . . . want to pick up a full-fledged +300-page book on the murders. I would highly recommend this book to anyone looking for a basic introduction to the case.”

Susan McNicoll lives in Vancouver, British Columbia, Canada. Her lifelong love of words and history has been the main focus of Susan’s writing career, which began in the 1970s when she worked as a reporter for The Ottawa Journal. Her latest book, The Opening Act: Canadian Theatre History, 1945-1953, was published in 2012 by Ronsdale Press, ronsdalepress.com. In this book, Susan crosses the ocean to tackle that most famous of serial killers, Jack the Ripper. In doing so, she returns to a country where she spent many of her formative years, including three at Tortington Park School in Sussex. Although her published work to date has been in non-fiction, Susan is currently working on a series of fables based on the four seasons of healing. However, she has also started another book focused on murder.