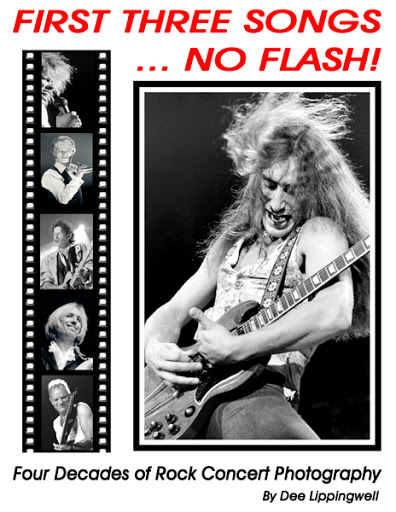 A keepsake edition of the 20th century's living legends of the rock and pop culture as photographed by one of the most enduring and best loved female “pit” photographers of our age, Dee Lippingwell. No flash allowed, no retakes possible, each image was captured as the artists performed their music live and on stage.

Although the photographs are the heart of the book, Lippingwell's brief asides about her encounters with the saints and sinners of rock are its soul. Her recollections of freeze framing the headline grabbing icons of our times is an enjoyable read for the generations of fans who have given this music genre the on-the-edge sophistication it deserves.

With four decades of shooting all the major rock acts worldwide, Lippingwell has accumulated thousands of photos and almost as many memories to go along with them. "First Three Songs...No Flash" is a humorous, poignant, revealing, and occasionally embarrassing memoir of one photographer's encounters with rock and roll aristocracy.

“Dee has specialized in capturing the essence of contemporary popular music on film, chronicling its evolution over the last two decades. It is a real treat to know Dee Lippingwell, the quintessential rock photographer. Let us hope that she continues to click away through the twenty-first century!”

- Long John Baldry, Entertainer. Quote from the forward “Best Seat In The House” published in 1987.

Dee is a self taught photographer with four decades of shooting all the major rock stars, from AC/DC to ZZ Top. Bowie, Bono, the Stones, the Who and Tina Turner to name a few are thrown in for further enjoyment. Dee has accumulated thousands of photos and as many memories to go along with them.

When her first book “Best Seat In The House” was released in 1987 it consisted of just photographs of the rock icons up to that point but she was questioned over and over if she’d met any of them so embarked on a journey of writing down her stories.

Being the first woman in her field garnered her plenty of attention from the media and her acclaim quickly spread so much so that in 1980 she was claimed as one of Canada’s Famous Women warranted by the fact that she had been published in virtually every daily newspaper in Canada.

Dee also shoots country artists and has been doing so for the past 20 years and in 2011 was inducted into the BCCMA Hall of Fame - her reward for preserving the history of the association with photographs for so many years.

First Three Songs ... No Flash! will be available in the FriesenPress Bookstore soon.