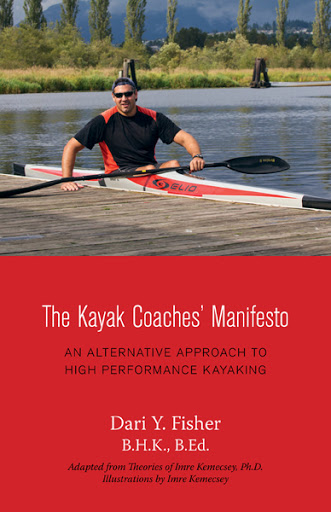 The author, Dari Y. Fisher has created this manual in consultation with Dr. Imre Kemecsey (Master Kayak Coach and Olympic Silver Medallist); regarding coaching structure and technique for elite and emerging Flatwater and Surfski kayak athletes. Initially, the author thought about writing a book on the subject of kayaking in general, however, after much consideration, he remembered a quote he once heard: “A book about everything is a book about nothing.” He is not in total agreement with this statement, nevertheless, it was determined that it would be far more beneficial to write in a precise manner regarding a small number of focused topics, as opposed to writing vaguely concerning a multitude of topics. In terms of what has been published, it has for the most part been another person saying the same thing in a slightly different way. It is barely beneficial to hear about “rotation”, or “using your large muscles in your back” for the umpteenth time! There is so much more to this sport than superficial and quite obvious biomechanical tips. Critical analysis alone cannot do this great sport justice, and will not assist our athletes to “step forward” to the next level!

"This book, entitled The Kayak Coaches’ Manifesto, authored by Dari Y. Fisher, is a precise summary of all that today’s coaches need to know in order to provide the best information to their developing athletes. It offers many answers and solutions for coaches in their daily work. We have been awaiting this manual for a long time! Thank you, Imre and Dari!"

Dari Fisher has been involved in the sport of Flatwater Sprint Kayaking for more than 20 years. He has had many roles over the years including being an athlete, a coach, a personal trainer, and a teacher.

Academically, Dari's post-secondary education commenced at Langara College, in Vancouver, Canada, where he received a Diploma in Coaching & Instruction. Subsequently, he attended the University of British Columbia in Vancouver, where he received a Bachelor of Human Kinetics. Years later he was admitted to the prestigious Urban Diversity Program at York University in Toronto, where he obtained a Bachelor of Education with a specialization in Physical Education.

Vocationally, Dari has developed and worked as a coach at four canoe and kayak clubs throughout Canada; these being the False Creek Racing Canoe Club (Vancouver, BC), the Burnaby Canoe and Kayak Club (Burnaby,BC), the Calgary Canoe Club (Calgary, AB) and the Burloak Canoe Club (Oakville, ON). Career wise, he has completed his eighth year teaching at an inner city high school in Surrey, British Columbia, Canada.