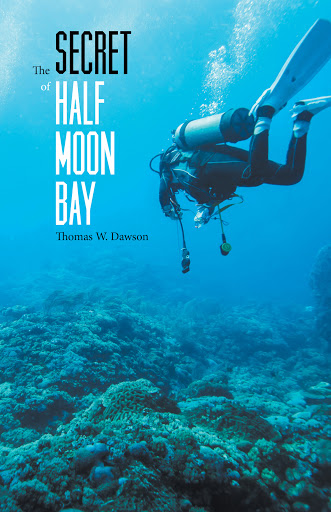 The Secret of Half Moon Bay
by Thomas W. Dawson

Now with enough money in their accounts to cover more than expenses, the decision was made. After graduating from their course, the two young men meet an American couple that are just as enthusiastic about diving as they are. Meeting up at the parking lot for access to the beaches at Half Moon Bay and the south end of Wreck Bay, they soon find that someone has a grudge. Why, they don’t know, but after the second incident happens, they decide to find out.

After they start diving in the bay, they are amazed at their discovery of parts of a sailboat mast. Investigating further they find old boards buried a couple of feet under the mud, on the bottom of the bay. Using the time between tides, they dig at the mud, until they find a hatchway. The excitement grows as they prepare to dive as a group, and discover what may be found inside the old wrecked hull.

Thomas W. Dawson has always loved to write. With the knowledge gained from his first book, Dawson has found the story writes itself. Then he just needs to steer it in the right direction. Dawson has completed three courses on writing for children, with the Institute of Children’s Literature.

He grew up in Northern British Columbia, but moved farther north to the Yukon after his father's death, getting a job operating equipment, relocating parts of the Alaska Highway. He has worked at road construction/ maintenance, oilfield construction, and in the logging and mining industries. All of this has given him a vast array of experience upon which he can draw for his stories.

Also a welder and mechanic, Dawson loves music, travelling, being with his friends, and quality time early in the morning, which is when he does his best writing.

He attends services regularly at the Whitehorse Baptist Church.

The Secret of Half Moon Bay will be available in the FriesenPress Bookstore soon.