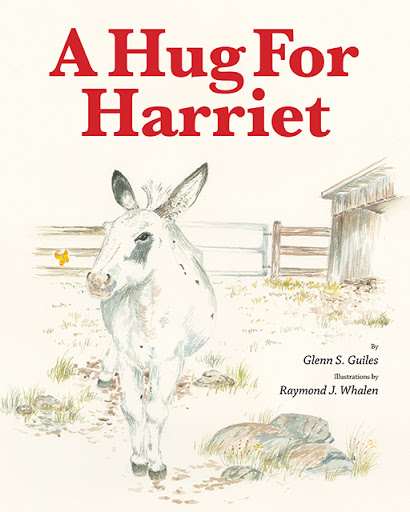 A Hug for Harriet
by Glenn S Guiles

Have you ever felt like you needed a hug? Everyone does at one time or another. And so does Harriet! Harriet is the youngest and smallest miniature donkey in a large herd. Miniature donkeys are mild-mannered and curious animals who love to be near people! But Harriet is unable to get close enough to the farmer who feeds her and all the other donkeys to get any attention. A Hug for Harriet is the story of her move to a new home with her friends Sally and Nacho. Harriet’s new home is where she can finally get close enough to her new owner, Mr. Michael, to get the hug she has always wanted!

"Guiles (Harriet's Big Adventure, 2015) tells a very simple story well. Harriet’s plight is sympathetic but not overdone, and readers will enjoy seeing her desire for love and affection being met at last. It’s unknown how the donkeys come to be living on a farm or why some are moved, but for Harriet, as for small children, the world can be arbitrary like that. Whalen’s lovely, softly colored images are realistic yet still very expressive—a good choice that elevates the book.

Glenn S. Guiles is Professor and Associate Dean Emeritus and former Director of Music Admissions at the State University of New York at Potsdam. He has taught music in the public schools and at the college level in New York, Pennsylvania, Nebraska, Missouri and Virginia. He studied at Ithaca College, Yale University and SUNY Stony Brook. He lives on a hobby farm in the Adirondack State Park area of Northern New York State.

Raymond J. Whalen was born in Potsdam, NY and now resides in South Colton, NY on a lake in the Adirondack State Park. He received his BFA from SUNY Oswego and MFA from Cranbrook Academy of Art. He is currently an art educator in the Parishville-Hopkinton School District, as well as an active painter and potter.