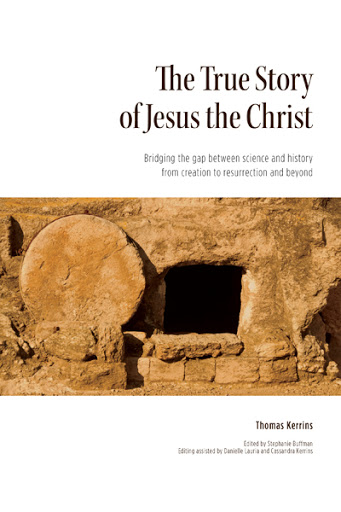 In The True Story of Jesus the Christ, author Thomas Kerrins examines the validity of the Story of Creation. To validate the Old Testament narrative of our history, that Jesus himself exists only because of Mankind's rebellion toward God starting with Adam, Thomas uses as evidence the Flood; the trials and tribulations of Abraham, Isaac, and Jacob; and the clues found beneath the sands of the Middle East. He also looks at the followers of Jesus, to find out who they were and what role they played in the beginning of Christianity.

Many experts and theologians are quoted, such as Dr. Juris Zarins, who shows through satellite imagery of Iraq, Iran, and Syria, the existence of fossilized rivers pinpointing the possible existence of Eden. Also quoted is Henry Rawlinson, who discovered the Behistune inscription that provided a tool to read another version of creation from a civilization 800 miles from where the Old Testament version of Genesis was written.

Furthermore, archaeological evidence will be presented to validate such events as the Exodus, the Kings of Israel, and the invasions from Babylon and Persia.

Understanding Jesus was to know who he was and what was his mission.

"Bridging the gap between science and history".

Thomas Kerrins was born and raised in rural Michigan. He was brought up in a Protestant household, however he converted to Catholicism in 1992. He retired from the Michigan Department of Corrections after 22 years of service and as a hobby studies archaeological and scientific religious findings.

The True Story of Jesus the Christ will be available in the FriesenPress Bookstore soon.