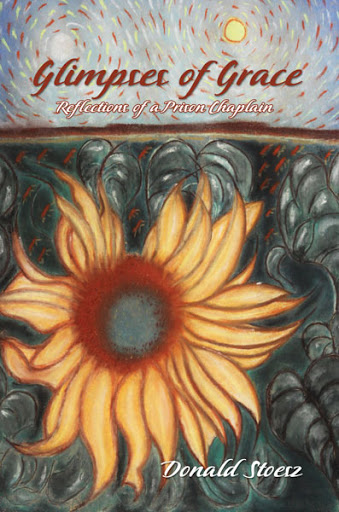 Glimpses of Grace
Reflections of a Prison Chaplain
by Donald Stoesz and Chalk drawing on front cover by D.L.W., donated in 1991

“Glimpses of Grace” relates the joys and challenges of a prison chaplain through a series of one-page vignettes. The open-ended stories are written with a pastor’s heart that seeks to minister to the needs and hopes of offenders who have committed serious crimes. The book takes the reader from opportunities of pastoral care to issues of relationships, authority, and restorative justice. The author explores the challenges of ecumenism and inter-faith dialogue while remaining true to his Christian faith. He looks at ministry from the perspective of volunteers and writes about how staff can be an ally in corrections. He regards offenders as subjects who define the nature of the pastoral relationship.

Donald’s high view of ecclesiology and solid theological background give this book a unique perspective. Don regards the chapel community as a natural extension of the visible body of Jesus Christ of which the larger church is a part. Don considers how offenders’ experiences and other faiths can make one a more devout believer. The profound experiences of the “other” make one look more deeply into the resources of one’s own faith.

“This is a must read for all who have an interest in prison ministry. The author has a unique way of weaving real life stories into his pastoral reflections. These stories underscore the complexity of working in an area in which most of us know little.”

Donald Stoesz grew up in the small, tight-knit Mennonite community of Altona, Manitoba. He attended a private Mennonite high school and Bible college before going on to seminary studies in Elkhart, Indiana. Upon completion of his Masters of Divinity degree in 1981, Don became the pastor of a Mennonite church in Calgary, Alberta. In 1983, Don was accepted into graduate studies at McGill University in Montreal. He graduated with a Doctor of Philosophy in religious studies in 1991 and taught as a part-time lecturer until 1996.

Donald began his prison chaplaincy career in 1987, when he filled in at Leclerc Institution for Reverend Tom Kurdyla, a Presbyterian minister. Don worked as a chaplain in a variety of federal prisons in Quebec before transferring in 1998 to Bowden Institution, a federal prison in Alberta. Most recently, Don has become involved in chaplaincy at the Bowden annex and in the Red Deer community.

Don is married to Naomi Brubacher and they have four children, Matthew, Kevin, Justin, and Sonya.