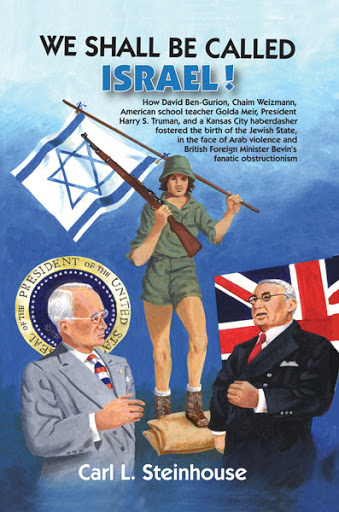 We Shall Be Called Israel!
by Carl Steinhouse

The exciting story of how the Jews, in the face of violent opposition of five Arab armies and Palestinian Arab guerrillas, and the implacable hostility and obstructive tactics of the British, ushered the State of Israel into being. Appreciate how, with only small arms and heroics, the Israelis desperately held off the Arab armies, which possessed modern heavy weapons; how the British blockaded the new state to prevent any weapons from reaching the Jews while at the same time supplying heavy arms and aircraft to the Arabs. How Jews in Israel and the United States, using guile and chutzpah, conspired to acquire heavy weapons and ship them into Israel despite the British blockade, in time to use for Israel’s defense. Learn how the Israelis defied the powerful British Navy and secretly transported thousands of Jewish Holocaust survivors into Palestine.

Read how Jewish Palestine leaders Ben Gurion, Chaim Weizmann, and former Milwaukee school teacher, Golda Meir, and others, overcame impossible odds to usher Israel into existence. Understand the importance of a Kansas City haberdasher, who convinced President Harry Truman to support the new state despite fierce objections of his own State Department,and British foreign Minister Ernest Bevin’s vicious schemes to prevent the new state from coming into existence. Author’s creative narrative of history puts you in the middle of the action.

Carl Steinhouse, a retired lawyer, was a federal prosecutor for the United States Department of Justice for 15 years after which he went into private practice specializing in class actions, white-collar crime, and civil and criminal trials. In the early fifties, he served as an intelligence analyst in the Army Counterintelligence Corps.

Mr. Steinhouse was Vice Chairman of the Antitrust Section of the American Bar Association, and on the editorial boards of two Bureau of National Affairs publications. He also wrote and edited books on grand jury practice, criminal trial practice, and criminal juries and a frequent lecturer at ABA National Institutes and video courses on grand jury and criminal trial practice. He is a contributor to the Naples Daily News writing about the humorous side of the law.

In the 80’s and 90’s he was active on an international level for the National Conference on Soviet Jewry, making several trips to Jerusalem and Helsinki on fact-finding missions and to the Soviet Union to aid Refusniks (those Jews the Soviets refused to let emigrate). A board member of the Cleveland Anti-Defamation League until 1999 and formerly on ADL’s National Legal Affairs and National Fact Finding Committees, he was active in ADL matters, including monitoring activities of hate groups.

Mr. Steinhouse, had lost family in German-occupied territory during World War II, and was personally affected by the Holocaust. He has published five books in his Holocaust series Wallenberg is Here!, Righteous and Courageous, Improbable Heroes, Barred, and Wily Fox. The books received rave reviews from Holocaust scholars and authors.

The author is happily married and lives in Naples, Florida, where he does his writing.

We Shall Be Called Israel! will be available in the FriesenPress Bookstore soon.