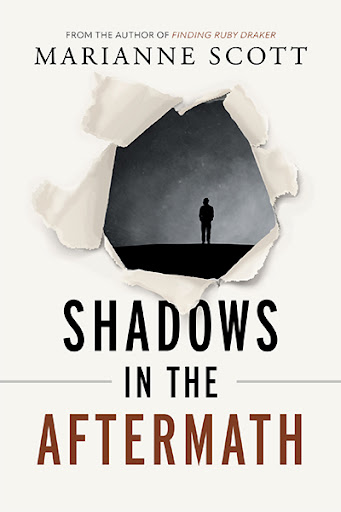 Shadows in the Aftermath
by Marianne Scott

Ruby Draker has found new strength, and is ready to move on after Felix Szabo devastated the Draker estate in Nice, France. Three Drakers are dead leaving Ruby in grief and with thoughts of revenge. The Drakers are a family built of survivors; each rescued from Felix Szabo, a psychopath, who sought to murder his former agents at the CIA whom he believed betrayed him. The Drakers’ sole mission is to stop Szabo from adding more victims to his list, and although he also perished during the invasion, his legacy continues to haunt them. When the Drakers learn that Robert Draker, presumed dead since the shoot-out at Robert’s farmhouse, may be alive and at a rehab clinic in Portland, Maine, the Drakers know it could be a set up, but they have no choice but to try to find him and bring Robert home.

Shocked that Robert may be alive after all, the family head from France to America to find him. It’s only when they arrive in the west that they realize finding Robert won’t be as easy as they thought.

Szabo has found a way to terrorize the Draker family, even after death. His outstanding debt with a Corsican crime family mean the Drakers must now find and deliver a shipment of plutonium, which will likely be used by terrorists to create a nuclear bomb, to get Robert back. As Ruby struggles with the decision to save her brother or North America, she must also evade the CIA, who are trying to stop the Drakers from delivering the plutonium.

In all the years Marianne Scott worked in business, she never knew she had a flair for storytelling. Being tangled in the day-to-day challenges of meeting deadlines, dollar targets, and ever tighter delivery expectations left little time or energy for creativity. Yet at her core, she always felt something there. She didn’t know how to name it, this yearning, that grew inside her with every passing year.

Once she left the corporate world, instead of penning non-fiction tales, she gave herself over to her imagined worlds. Her truest pleasure, amusement, and release soon came from turning the ordinary into the extraordinary. From this, Finding Ruby Draker and Shadows in the Aftermath were born.

Shadows in the Aftermath has been nominated by our staff as one of their favorite books.