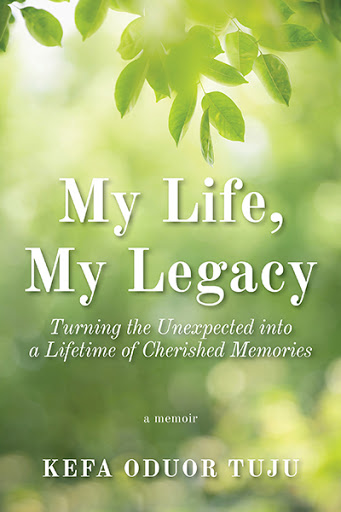 My Life, My Legacy
Turning The Unexpected into a Lifetime of Cherished Memories
by Kefa Oduor Tuju

Kefa Oduor Tuju passed away too young to an incurable brain tumor in 2018. Leaving behind a loving family, including his wife, Christine, and his two sons, Jonathan and Matthew, Kefa wrote these memoirs as a legacy of the lessons he learned during his life and the wisdom he wished to pass on.

In this book, Kefa tells us of his childhood and education in Kenya, finding his faith as a young man, his marriage and family life, his move to Canada, and his final struggle with cancer. Walk alongside Kefa as he shares some of his most intimate thoughts concerning family, faith, life and death. As Kefa honestly describes the challenges and joys of his life’s journey, he shows how his relationship with God allowed him to be victorious even in painful times.

This book closes with a chapter by Kefa’s wife, Christine, who gives a passionate summary of how Kefa spent his last days, sharing tributes from his family and close friends. This book is a treasure for anyone who knew Kefa while he was alive… and those who didn’t will, come to know him through these pages. Kefa’s passion for God and family is at the forefront of this book as he describes the best gift he could leave behind: his legacy.

Born in Bondo, Kenya, in 1971, Kefa Oduor Tuju studied Education with a major in French and English literature, earning his Bachelor’s degree in 1996 from Kenyatta University, as well as a Master’s degree in Business Administration in 2006 from the University of Nairobi. His family emigrated to Canada in 2015. He was an adaptable and passionate worker in both business and education sectors. He last worked for the Medicine Hat School District and was stationed at the George Davison Elementary School in Medicine Hat, Alberta Canada, where he lived until the time of his passing. He leaves behind his wife, Christine, and sons, Jonathan and Matthew, who live in Calgary, Alberta Canada.