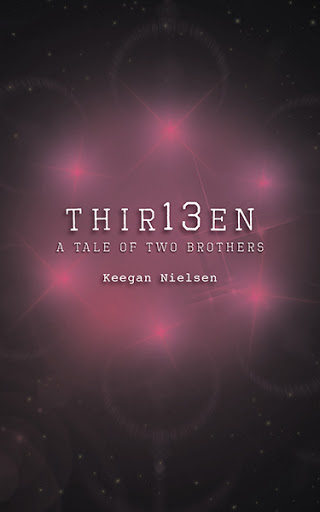 Thir13en
A Tale of Two Brothers
by Keegan Nielsen

The year 2083 isn’t pretty. A strange plague has turned 98% of the world’s population into violent, zombie-like creatures known as the Infected. The remaining 2% of the population live in three sectors that are precariously protected by the Earth’s Viral Defenses (EVD), the new global government. And if that isn’t bad enough, strange, ominous lights have started to appear in the sky.

In a world such as this – one where survival is often measured in hours or days rather than in months or years – friends and family are everything. That’s why 17-year-old Conner Weston and his older brother Tyson will stop at nothing to find each other after having been separated four years earlier during the initial Outbreak. Individually, the brothers’ paths become entwined with the Thirteen, an elite faction of mercenaries who have been contracted by the government to rescue survivors outside of the EVD’s protected sectors. At last the brothers have a chance to be reunited, that is, if they can stay alive long enough.

"Thir13en brings us the dazzling and disturbing kingdom of a hot new literary prodigy." – Marnie Woodrow, Author of Spelling Mississippi

Keegan Nielsen has always risen to a challenge. Born with a rare form of Fukuyama Muscular Dystrophy which limits his mobility, he has never allowed it to prevent him from achieving his goals. Thir13en: A Tale of Two Brothers is Keegan Nielsen’s first novel and an amalgamation of his favorite genres – sci-fi, fantasy, horror, and action-adventure. Keegan is an active member of a writers’ group in the Okanagan Valley where he continues to develop his craft. He is the author of several short works of fiction. Keegan resides in British Columbia, Canada.