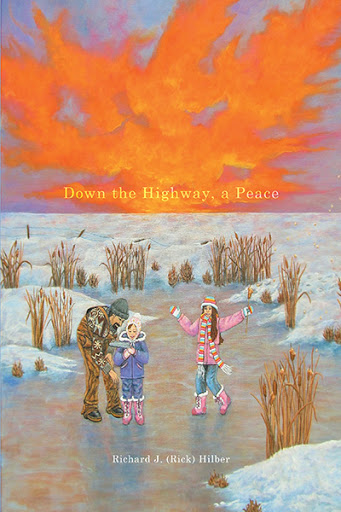 Down the Highway, a Peace
by Richard J. (Rick) Hilber

The northern Great Plains have given this poet a first canvas for his imaginative art as found in his first published poetry collection. In recent years he has began to struggle with the difficult topics of his home region, primarily the difficulty of life out on the northern Great Plains in what he has termed the “patches.” In these poems are references to the sugar beet patch, the dry land farming patch, the irrigated farm land patch, the ranching patch, the strip mining patch, and the oil patch. The agrarian culture of his home region is a place of core values and spiritual strengths which encourage him to live simply inspite of the new “badlands” left in the wake of the cultural genocide and environmental degradation of the empire builders of the European ascendancy over North America. Here are poems spoken by personae which can be said to each be the masks of the poet Rick Hilber who in creating his poems would have us, poet and reader or listener, step into the shoes of another. This is a poet that trusts that his individual experience is also a disclosure of the demands on each of us in accepting life on whatever terms it is offered us.

"Richard Hilber’s collection of poems is both a gentle and a profound invitation to slow down. To really slow down. To read and to think and to reread and to wonder. And in keeping with the amazing power of the spareness of verse, his is an invitation to be mentally and emotionally arrested by a word, an image, a recollection that connects to one’s own life, one’s own places, and one’s own experiences. This collection has a wonderful sense of place, of movement, and of person; and, while it’s strikingly personal to the author, it is simultaneously universal to the reader.” - Dr. Jennifer Montgomery, Harvard University (a doctoral candidate there at the time of her writing this preview), Cambridge, Massachusetts.

“I am struck by the inclination of Richard Hilber's poems to confront philosophical and spiritual questions most poets avoid these days, perhaps fearful of the ghost of William Carlos Williams. They arise from someone trying to make sense of the absurdity of our history. Even as they worry about our fate from war and global warming, they are full of discovery and praise. Ultimately they argue for a more humble perspective that includes us all." - Poet Dale Jacobson, also an essayist and instructor at the University of North Dakota, Grand Forks, North Dakota.

"The rhythms of reality in his words carry the reader forward image by image, poem by poem, section by section. This poet is inviting the reader deeper and deeper into an experience of life as a journey into honesty and acceptance of life lessons. Here in these poems are subtle word plays which arise for appreciation but never distract. Again and again, Hilber demonstrates a poet’s self-knowing, delivers on empathy, and delights by restraint of sentiment. These poems are what serious travelers on life’s highway need, a trusty companion who offers a poet’s mirror, rather than a distracting map.” - Rev. Jacki Belile, CPC, Living Well Ministries, Chicago, Illinois.

This author of the babyboomer generation lives, works, and writes in St. Paul, Minnesota, where he has resided since 2001. His work life has been a rich variety of experiences, from carpenter's helper, to taxicab driver, to school teacher, to bank teller, to guardian ad litem for child protection, to attorney, to bus driver. He continues his adult lifetime pursuit of his art as a poet as he enters into his retirement years. The legacy he most desires for his children and grandchildren is premised on his love of his native state of North Dakota. The life a parent gives us is the first gift of life, while the life one gives oneself is the second gift of life. He hopes that you will find in his collection of poems, Down the Road, a Peace, such a marker of a life given into being.