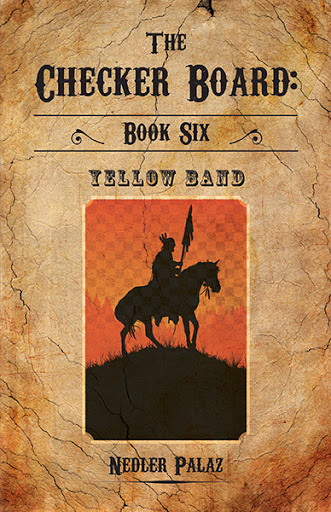 The Checker Board Book Six
Yellow Band
by Nedler Palaz

In the late 1880’s, Dave Smith finds work at a freight line in a remote mining town as he pursues the reason why renegade Cheyenne chief, Yellow Band, is stealing assay rock samples; and why vindictive Sheriff Gus Tern turns the entire town against him.

One of the surprising finds is none other than Andee Piper who now teaches at a local School for Girls. Five years earlier, Dave encounters the teenage irrepressible tom-boy, finds she is now all grown up, and regards Dave in an entire different manner, renewing her efforts toward captivating him.

Floyd Wilkins also has notions of exclusive intentions on Andee which soon creates a clash. Maxwell Perkins, a successful mine owner and operator, also sees Andee’s unique personality as fascinating. This creates a three way conflict is one which Dave would sooner evade than confront.

A near fatal Indian holdup while Dave is driving the freight run points toward his being set up to take the blame for the incident. Instead he tracks the bunch, and after a shootout recovers the wagon. He captures the prize, renegade Chief Yellow Band who does not remain captive long.

In a later attack, Dave stands off the horde long enough to survive. Dave pursues the fleeing attackers into the mountains on a rigorous track. Joined by Floyd Wilkins, who grimly rescues Dave from his own folly, the two man hunt becomes a trial of wits against wily Yellow Band.

Unable to identify who has been paying off Yellow Band, Dave investigates the gold mines owners and slowly begins to unravel the devious plot to high-grade a mine. Now immersed in identifying the devious scheming behind a killer’s organization, Dave doggedly pursues leads that eventually strike pay-dirt.

The climax requires all of Dave’s grit, honesty, and resolute determination to stay alive.

Nedler Palaz is a pen-name chosen by the author to reflect the western background of the fiction series titled “The Checker Board” books. The author, Nellie Pallagi, has a life time interest in the western genre. The books include good character development, plenty of action, and a story plot designed to bring back interest in Western lore and storytelling.

Beginning in 1880 Texas, the stories relate to Dave Smith’s efforts to carve out a life with talents that include a fast gun, a race horse, and a Cheyenne partner.

Follow the adventures of Dave Smith and Sam Eagle Feather Larson from Texas into New Mexico territory, north into Wyoming, and on to further western exploits.