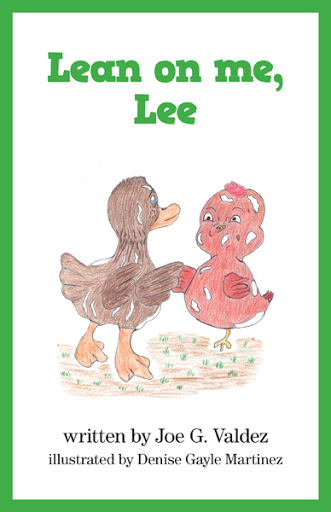 Lean On Me, Lee
by Joe G. Valdez

Lean on me, Lee is a story of an unusual little duck and little chick. The little duck was brown with some unusual white stripes throughout his body. The duck also had a leg and foot that was much larger than the other.

Joe G. Valdez was born on May 6th, 1943 in the town of Crystal City, Texas. Having six brothers and seven sisters he was the tenth child of fourteen. Growing up in Texas, North Dakota, Wisconsin, and finally settling in California in 1959. At age 25 he married the love of his life Rose E. Castro. They spent the next 37 years together before her passing. They had three children together which resulted in eight grandchildren. To take care of his family he worked as a Jeweler, a Diamond Counselor, and a Diamontologist. This eventually led him to owning his own jewelry stores for nine years specializing in custom manufacturing and repairs. After which he spent the next 18 year in the automobile industry as a salesman. Eventually retiring and focused his attention in writing. In 2006 he published his first book “Going for the Gold” which was loosely based on a true life experience.